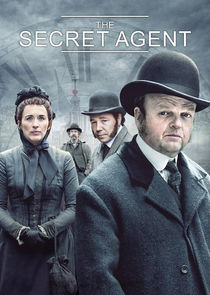 An explosive and heart-breaking adaptation of Joseph Conrad's classic novel of terrorism, espionage and betrayal.

London, 1886: Verloc runs a seedy sex shop in the heart of Soho. But unknown to his loyal wife, Winnie, Verloc is also paid by the Russian embassy to spy on an anarchist cell. Furious at Britain's refusal to confront the anarchist threat sweeping across Europe, Verloc's Russian handler gives him a mission: Orchestrate a bombing that will be blamed on the anarchists and provoke a crackdown from the British. Refuse; and Verloc's identity as a spy will be revealed to his anarchist comrades.