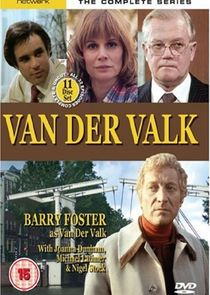 Van der Valk is a British television series that was produced by Thames Television for the ITV network. It starred Barry Foster in the title role as Dutch detective Commissaris "Piet" van der Valk.

The stories are mostly based in and around Amsterdam, where Commissaris van der Valk is a cynical yet intuitive detective. Drugs, sex and murder are among the gritty themes of the casework. However, the beautifully shot Amsterdam locations give a peculiar contrast to this.