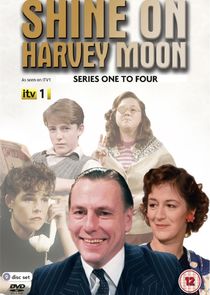 Shine on Harvey Moon is a British television series made by Witzend Productions and Central Television for ITV from 8 January 1982 to 23 August 1985 and briefly revived in 1995 by Meridian.

This generally light-hearted series was created by comedy writers Laurence Marks andMaurice Gran. The series is set in the East End of London shortly after the Second World War. Upon being demobbed RAF serviceman Harvey Moon, played by Kenneth Cranham, returns home and finds his family involved in various troubles. His wife Rita, played byMaggie Steed, is not interested in resuming their relationship, and works in a seedy nightclub frequented by American servicemen. He becomes involved with the Labour Partyand the union movement.

The name of the series is a wordplay on the title of the popular 1908 song "Shine on, Harvest Moon!".