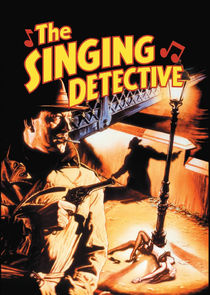 The Singing Detective was broadcast in the United Kingdom on BBC1 in 1986 on Sunday nights from 16 November to 21 December with later PBS and cable television showings in the United States. Mystery writer Philip E. Marlow is suffering writer's block and is hospitalised because his psoriatic arthropathy, a chronic skin and joint disease, is at an acute stage forming lesions and sores over his entire body, and partially cripples his hands and feet. As a result of constant pain, a fever caused by the condition, and his refusal to take medication, Marlow falls into a fantasy world involving his Chandleresque novel, The Singing Detective, an escapist adventure about a detective (also named "Philip Marlow") who sings at a dance hall and takes the jobs "the guys who don't sing" won't take.