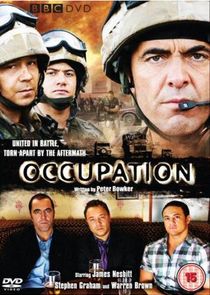 "Occupation" is a BAFTA Award–winning three part drama serial broadcast by BBC One in June 2009.

The serial follows the fortunes of three British Army soldiers from the 2003 invasion of Basrato 2007. Each is inspired to return to Basra for different reasons: one returns for love, one for monetary gain, and one for his belief in the mission to rebuild the country.