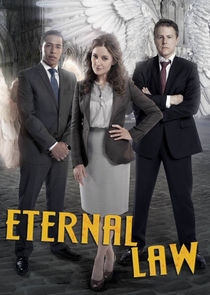 Set in the ancient English city of York, Eternal Law is about angels living amongst us, helping and guiding humans when they are at their most desperate. The series starts with one grumpy, seen-it-all-a-million times angel called Zak arriving to start a fresh tour of duty with his new colleague, the constantly amazed neophyte, Tom, who has never before spent time with humans. They live in a ramshackle house stuffed with books and paintings, where they are looked after by the beautiful, mysterious Mrs. Sheringham.

We discover that in his previous tour of duty Zak did a terrible, completely forbidden thing--he fell in love with a human woman, Hannah. To his horror he realises that Hannah has been put in York to tempt him, to test him. Although he loves her with every fibre of his body he knows he can never be with her. It is a cruel, bruised, aching romance.

There are angels in all walks of life but our angels are lawyers. Which means that, every episode, they have to deal with humans at their lowest and most exposed. It could be a man standing trial for murder; a bitter custody battle; a fight to save an old people's home; a frightened young squaddie accused of cowardice. Our angels strive their best to fight for their clients, to win their cases, to put them back on the straight and narrow. They don't always win but they always fight to the last.

Eternal Law is emotional, funny and fresh. Each episode ends with Zak and Tom high up on York Minster, wings out, sharing a bottle of wine and talking about this week's case. They find human beings complicated, contradictory, vain, baffling, greedy, passionate, illogical... and utterly, compellingly wonderful.