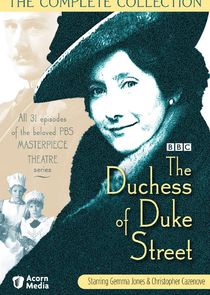 The Duchess of Duke Street is the story of the rise of Louisa Leyton (Gemma Jones) from kitchen maid to the most famous cook in England. Her hotel, the Bentinck on Duke Street, is the turn of the century setting for her affair with Charlie Tyrell (Christopher Cazenove), her run-ins with family members, the activities of her high society guests and the lives of her faithful staff. Over two series this BBC Production tells an interesting and eventful twenty year story which also provides a fascinating insight into life in the early 20th century. The series is in fact based on the life story of celebrated cook Rosa Lewis, who ran the Cavendish Hotel on London's Duke Street.