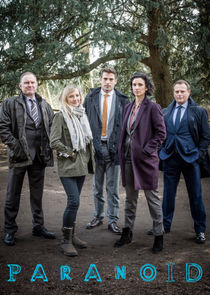 A conspiracy thriller, Paranoid tells the story of a female GP who is murdered in a rural children's playground with an abundance of eyewitnesses. A group of detectives embark on what seems to be a straightforward murder investigation, but as they delve deeper into the case they are quickly drawn into the twists and turns of an ever-darkening mystery, which takes them unexpectedly across Europe.