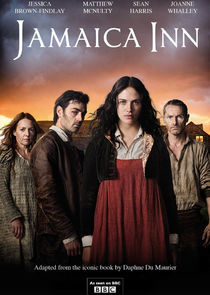 Set in 1820 against the forbidding backdrop of windswept Cornish moors, the story follows the journey of young and spirited Mary (Brown Findlay) who is forced to live with her Aunt Patience (Whalley) after the death of her mother. Mary arrives at the isolated Jamaica Inn to discover her Aunt is a shell of the carefree woman she remembers from her childhood, and instead finds a drudge who is firmly under the spell of her domineering husband Joss (Harris). The Inn has no guests - the rooms are locked and kept for storage - but it soon becomes clear that it's a cover, as Joss is the leader of a smuggling ring, and Jamaica Inn the hub of his ‘free' trade.