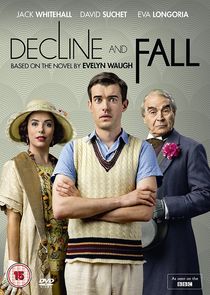 Decline and Fall sees Paul Pennyfeather as an inoffensive divinity student at Oxford University in the 1920s, who is wrongly dismissed for indecent exposure having been made the victim of a prank by The Bollinger Club.

Dr Fagan is the headmaster of Llanabba, an obscure public school in Wales where Paul first finds employment and works with fellow teacher Grimes. It is at the school that he meets the Honourable Mrs Margot Beste-Chetwynde, who is the mother of one of the pupils.