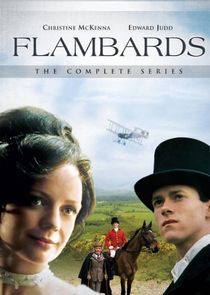 In the early 1900's in England, young Christina is orphaned and goes to live with her Uncle Russell, who owns the country estate of Flambards, and has two sons. Mark, the elder, is a wastrel, a roue and, like his father, loves to hunt. The younger son William lives to fly aeroplanes. Christina finds herself struggling with the ideas of classism as she falls in love with country life, the hunt, and one of her cousins. But after their impulsive marriage, when her husband is called away by the First World War, Christina must keep Flambards afloat by herself.