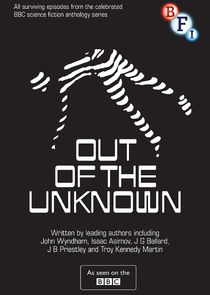 Out of the Unknown is a British television science fiction anthology drama series, produced by the BBC and broadcast on BBC2 in four series between 1965 and 1971. Each episode was a dramatisation of a science fiction short story. Some were written directly for the series, but most were adaptations of already published stories. The first three years were exclusively science fiction, but that genre was abandoned in the final year in favour of horror/fantasy stories. A number of episodes were wiped during the early 1970s, as was standard procedure at the time. A large number of episodes are still missing but some do turn up from time to time; for instance, Level Seven from series two, originally broadcast on 27 October 1966 was returned to the BBC from the archives of a European broadcaster in January 2006.