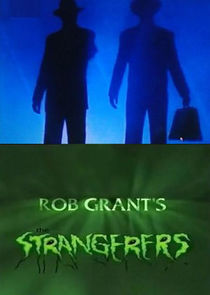 The Strangerers is a comedy science-fiction series written by Red Dwarf co-creator Rob Grant and centred on a group of evolved vegetable aliens disguised as humans who land on Earth to carry out a secret mission. When their Supervisor is decapitated, two inexperienced Cadets have no idea what the mission entails, but using a mixture of their of own language, and things they have observed in old 1950s movies, they try and get through the crazy world we live in without getting caught by the various shady organisations after them.