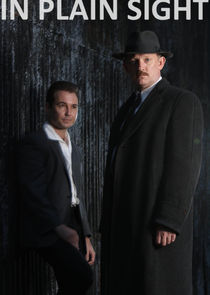 In Plain Sight is a new three-part mini-series based on the true story of Lanarkshire detective William Muncie's quest to bring to justice notorious Scottish killer Peter Manuel.

Muncie first arrested Manuel in 1946 for housebreaking, but also successfully convicted him for a string of sexual assaults. Manuel vowed revenge. Released from prison in 1955, Manuel embarked on a two-year killing spree, claiming eight lives in the close-knit communities of South Lanarkshire. Manuel evaded capture for so long because he was unlike anything the local police had ever encountered: A murderer without any discernible motive whose victims were chosen at random. Muncie was the one man who had Manuel's measure and doggedly refused to give up until Manuel was brought to justice.