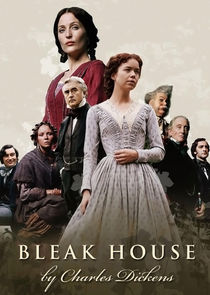 From its glittering heights to its very lowest depths; a skilfully crafted thriller; an epic feast of characters and storylines; and a passionate indictment of the legal system that is as searingly relevant today as it was in the mid 19th century.

It was first published in 19 monthly installments between March 1852 and September 1853. The TV adaptation, written by the award-winning Andrew Davies, comprised a one-hour opening episode followed by 14 half-hour episodes.

It was shown twice weekly, using the pace, multiple storylines and cliff-hanger endings more usually associated with popular drama. The aim was to return Dickens to the broad audience he originally wrote for.

It tells the story of the icily beautiful Lady Dedlock (Gillian Anderson), who nurses a dark secret in her past, and the merciless lawyer Tulkinghorn (Charles Dance), who seeks to uncover it.

Then there's the generous John Jarndyce (Denis Lawson), struggling with his own past, and his two attractive young wards Richard (Patrick Kennedy) and Ada (Carey Mulligan).

Like Lady Dedlock, they're all caught up in the infamous case of Jarndyce vs Jarndyce, which will make one of them rich beyond imagination - if it can ever be brought to a conclusion.