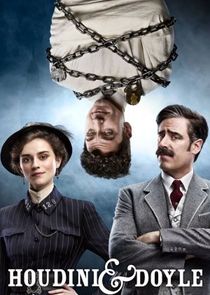 In the series, Houdini, Doyle and Stratton are tasked with the cases that nobody else can solve. It challenges their sense of what is real and what is not. Houdini is a skeptic, while Doyle believes in the unseen. Their diverse viewpoints make solving crime a challenge and often Stratton is put in the middle. The trio will take on cases that involve vampires, ghosts, monsters and poltergeists... or are they a ruse to conceal murder?