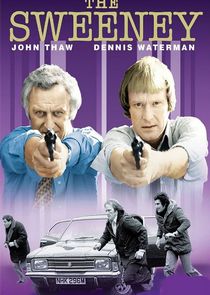 "The Sweeney" was one of the finest British police series of the mid 1970s. Jack Regan is a hard edged detective in the Flying Squad of London's Metropolitan police (called 'the Sweeney' from the Cockney rhyming slang 'Sweeney Todd' = 'Flying Squad"). He pursues villains by methods which are underhand, often illegal, frequently violent, and more often than not, successful.