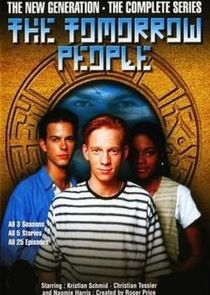 The Tomorrow People are the next stage of human evolution. They can teleport, communicate by telepathy, heal with the power of thought and they are unable to kill or harm any living creature. Aided by a mysterious and ancient spacecraft buried in the sand of a Pacific island, the Tomorrow People use their powers to protect the world, while trying to keep their own existence a secret for fear of exploitation.