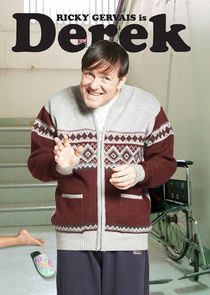 An Award-winning bittersweet comedy-drama about a group of outsiders living on society's margins, Derek centers around Derek Noakes (a tender, innocent man whose love for his job at a retirement home shines through. Derek cares deeply for the home's residents, because they are kind and funny and tell him stories of what life used to be like. Working alongside Derek is Dougie his landlord who is one of life's unlucky individuals; Kev a loveable train wreck; and Hannah a care worker in the home and Derek's best friend. She is smart, witty and hardworking, but unlucky in love, and, like Derek, always puts other people first.