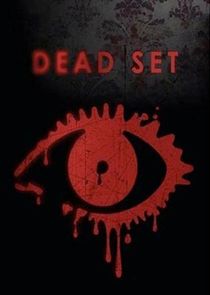 Starring Jaime Winstone, Dead Set is E4's horror series in which the dead are returning to life and attacking the living. Curiously there are a few people left in Britain who aren't worried about any of this - that's because they're the remaining contestants in Big Brother. Cocooned in the safety of the Big Brother house, they're blissfully unaware of the horrific events unfolding in the outside world. Until an eviction night when all hell breaks loose...

Kelly, a production runner working on a fictional series of Big Brother, finds herself trying to fend off the walking dead alongside her producer boss Patrick, boyfriend Riq and the remaining Big Brother housemates. Featuring cameos from Davina McCall and several former housemates, this is a cruel and twisted take on one of TV's biggest game shows.