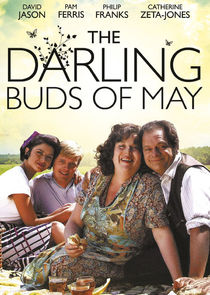 The Darling Buds of May paints an idyllic picture of 1950's rural England as seen through the lives of the Larkins, a farm family living in Kent. The show revolves around Pa Larkin (David Jason), a man of a kind and mischievous nature with a penchant for getting into scrapes and talking his way out of them with equal equanimity; and his daughters (including Catherine Zeta-Jones, in the role that launched her career), as they deal with growing up and discovering the joys and sorrows of young love.