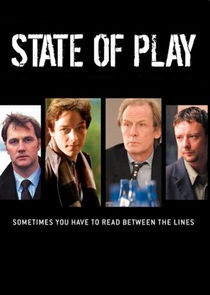 The serial begins with the murder of a young man, in what appears to be a drug-related killing, and the apparently coincidental death of Sonia Baker, the young researcher for MP Stephen Collins (Morrissey). As the deaths are investigated by journalist Cal McCaffrey of The Herald (Simm) and his colleagues (including Kelly Macdonald as Della Smith and Bill Nighy as editor Cameron Foster) it appears that not only were the deaths connected, but that a conspiracy links them with oil industry-backed corruption of high-ranking British government ministers.