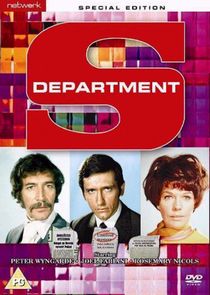 Department S is an elite branch of Interpol, headquartered in Paris. They are called in when a case has no logic or solution and the "regular" police investigations have run into dead ends. Sample cases include a jet landing in London with no passengers or crew aboard, a man in a space suit found dead in Soho, and an assassination of a wax dummy. The team consists of three operatives, each one with a different approach to solving cases, plus the official head of the Department.