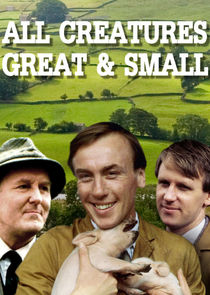 All Creatures Great and Small is a British television series based on the books of the British veterinary surgeon Alf Wight, who wrote under the pseudonym James Herriot. In 1977, the BBC tasked producer Bill Sellars with the creation of a television series from Herriot's first two novels, If Only They Could Talk and It Shouldn't Happen to a Vet, using the title of the 1975 film adaptation All Creatures Great & Small.

The series had two runs: the original (1978 to 1980, based directly on Herriot's books) was for three series; the second (1988 to 1990, filmed with original scripts) for four. Ninety episodes were aired in the six-year period.