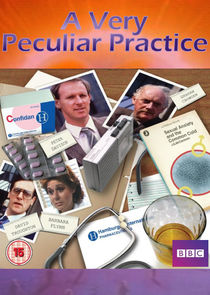 A Very Peculiar Practice is a BBC comedy-drama series, which ran for two series in 1986 and 1988. It was written by Andrew Davies, and was inspired by his experiences as a lecturer at the University of Warwick.

The series is a black comedy with surreal elements. It concerned an idealistic young doctor, Stephen Daker (Peter Davison), taking up a post as a member of a university medical centre. The centre is staffed by a group of misfits including the bisexual Rose Marie (Barbara Flynn), self-absorbed Bob Buzzard (David Troughton), and decrepit Scot, Jock McCannon (Graham Crowden) who heads the team in the first series.