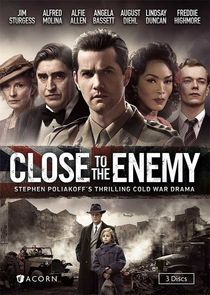 Close to the Enemy follows intelligence officer Captain Callum Ferguson, whose last task for the Army is to ensure that a captured German scientist, Dieter, starts working for the British RAF on urgently developing the jet engine. With the background of the emerging Cold War, it is clear to all that it's crucial for British national security that cutting-edge technology is made available to the armed forces as quickly as possible. Callum uses unorthodox methods in his attempt to convince Dieter to work with the British and eventually a friendship develops between the two men, but soon tensions arise as all is not as it seems.....