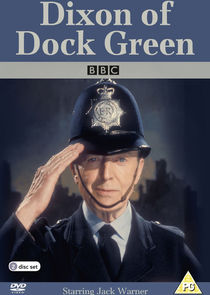 Dixon of Dock Green was a BBC television series about daily life at a London police station, with the emphasis on petty crime, successfully controlled through common sense and human understanding. The central character was a mature and sympathetic police constable, George Dixon, played by Jack Warner in all of the 432 episodes, from 1955 to 1976.

Dixon was the embodiment of a typical 'bobby' who would be familiar with the area and its residents in which he patrolled and often lived there himself. The series contrasted sharply with later programmes such as Z-Cars, which reflected a more aggressive policing culture; however its popularity cannot be underestimated, retaining a faithful following throughout its run and being voted second most popular programme on British TV in 1961.